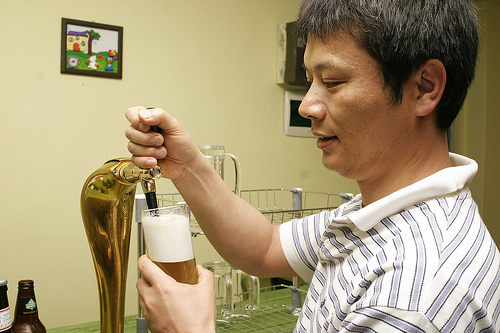 Imagine the perfect basement studio to set up a homebrew operation. There would be at least six 36-gallon stainless steel pots to simultaneously brew multiple batches. Preferably, these pots would sit over natural gas burners for cost-effective and convenient heating. The sink space would be ample and the storage space for ingredients, fermenters and bottles would be even more extensive.Â  Now add three Weber grills, a full-sized oven, two wooden picnic tables, a bar with two taps to hook up kegs, a commercial quality meat slicer and two large sausage stuffers.Â Finally, place this studio in Seoul, South Korea and you have Kim Euk-yeonâ€™s BeerLab.

On any given day, Mr. Kim can be found puttering around his newly acquired basement in a slightly grungy-looking apartment building near Yeonsinnae, in the outskirts of northwest Seoul. Although he appears much younger in his well-worn jeans and polo shirt, Mr. Kim is in his early forties and runs the online homebrew supply store GoodBeer, in addition to a brewing space he has named the “BeerLab.” Growing up in Gongju, near Daejeon a central town in South Korea, he has only left the country to visit nearby Japan.

Heâ€™s commonly found with his head deep in some project, often literally, and a cigarette hanging out of the side of his mouth. Extremely soft-spoken but always eager to share his newest creation and hear people’s opinions, Mr. Kimâ€™s BeerLab is an easy place to pass a Saturday afternoon.Â His current warehouse is based out of nearby Ilsan, and he moved into the new studio space in Yeonsinnae in early January 2010. He estimates that over the years he has invested nearly $12,400 into equipment to furnish the BeerLab. His new space is a few minutes by foot from where his home, and usually his two young daughters stop by and play for a bit in the afternoons. They are nine and ten years old in Korean ages, approximately eight and nine in Western ages. Unorthodoxly, they don’t attend any hogwans, the Korean word for after-school private schools, like most other Korean children in Seoul. Often his wife shows up in the early evening if it is a long brewing day and cooks up a feast for everyone. 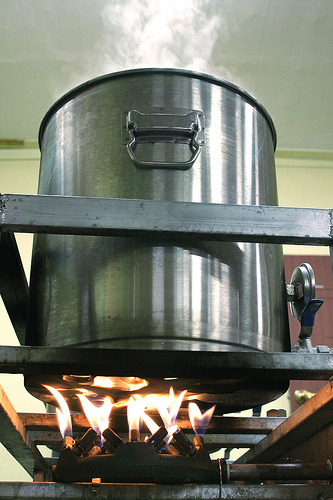 36-liter stainless steel boiling pots at the BeerLab hooked up to natural gas burners. Mr. Kim also has the whole set up conveniently on a metal frame with wheels so it is mobile.

Mr. Kim’s business is rare considering that Korea has extremely limited beer choices compared to the rest of the world. As of today, there are two companies that produce all of the beer bottled in Korea: Hite and Oriental Brewing (OB). These two companies only produce 14 varieties of light, lager style beers and one weak stout. Unfortunately, Mr. Kim prefers dark, bitter beers, particularly oatmeal stouts and this was his motivation behind opening GoodBeer.

Prior to owning GoodBeer, Mr. Kim worked as a salesman for Haansoft (called Hancom as of 2010), the largest Korean software company. He originally tried â€œgood beerâ€ in Korea but the inspiration to brew his own beer didn’t come until he was on a business trip to Japan in the early nineties. He got a taste of homebrew there and asked his host, â€œIs brewing really possible in your home?â€ Upon returning to Korea, Mr. Kim promptly began researching methods of brewing this elusive â€œgood beer.â€ Utilizing the Internet, books, word-of-mouth, trial-and-error, he is mostly a self-taugh brewer. This is no easy task, considering that ten years ago, when he commenced his brewing career, there was no supplier in Korea. Unphased, Mr. Kim made all his own equipment and imported his ingredients directly from England or the United States. He eventually left HaanSoft and started GoodBeer because,â€œI like this, how do you say it, this job. And I like beer. I like to enjoy it.â€ He opened his online company about ten years ago, but it was nearly four years before he started earning a profit. Considering that Mr. Kim abandoned a very lucrative job and that Koreans are often driven by success and working for the chaebol,or big conglomerates, this is very unusual.

Starting his business in Korea wasn’t easy. The biggest hurdle for Mr. Kim was language, which seems surprising for such an insular country. However, Mr. Kim’s business stems from a more global taste and thus he must deal with the international community. For example, he imports all of his ingredients; hops, malt, yeast and the rest. He pays a 274% tariff on the imported malt from Germany, which converts into him paying four dollars for 1 kg of barley compared to about $1.50 without the tax.Â Brewers around the world face tariffs, but rarely at this level. In 2002, the barley tariff in the European Union was reduced to zero.
Koreaâ€™s high tariffs are a byproduct of a long tradition of highly protectionist economic policies. 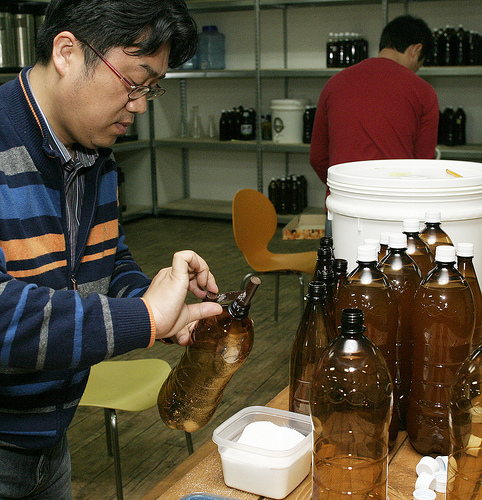 For these reasons, Mr. Kim laments that the government in Korea makes things expensive. This surprised us because there seems to be many small, independent businesses in Korea. We had thought that the hurdles for starting a small business would be more bureaucratic and less financial. However, Mr. Kim seemed focused on the cost. He had to save nearly about $50,000 from working at Haansoft just to start GoodBeer.Â He claims that the laws for starting your own business are very easy. You need, â€œfirst money, and trading knowledge, foreign language like English, Daum Homebrewing club, Internet [and connections!]â€

So our next question was, if starting a business in Korea is so easy, why is homebrewed or craft beer so unavailable? Mr. Kim was ready with an answer. If the beer rat race is any indication of the rest of the small business industry in Korea, then starting a business is easy but expanding it is almost impossible. Mr. Kim explained that companies must get permission from the national tax office to start bottling and selling beer. In order to get permission, companies must have the equipment to produce 100,000 kiloliters per month.Â One keg is approximately 60 liters so this puts a producer at a minimum output of nearly 1.7 million kegs per month, just to legally produce. Obviously, this is prohibitive to any small start-up brewery. â€œNot just anybody can produce beer, but only big companies are allowed to produce beer,” Mr. Kim said.Â In contrast, one of our favorite microbreweries from Washington, Red Hook, produces 30,000 US barrels per year or 3,500 kiloliters per month.

His overhead is approximately ten percent of his sales each month. Mr. Kim is the largest homebrewing online shopping mall in Korea, and he estimates that he makes $16,500 from 300 to 400 customers. He is extremely happy with his company, and his only business partner is his wife. In addition to on-line sales, about three people a week coming to use his â€œBeerLab.â€ The BeerLab equipment is available to anyone that wishes for the nominal fee of $10 per batch of beer plus the cost of ingredients, which is usually between $40 and $60 for 20 liters of beer. The rest of his profits come from Internet sales, mostly to Koreans.

Mr. Kimâ€™s malt storage area for use at the BeerLab. He usually stocks three base malts and a variety of specialty or flavoring malts such as smoked barley or rauch.

Mr. Kim’s malt storage area for use at the BeerLab. He usually stocks three base malts and a variety of specialty or flavoring malts such as smoked barley or rauch. Photo: Tyler Ray/Tyler Ray Photography Edited by: Kristin Pederson

For now, Mr. Kim only gives away a few bottles of beer at a time to people and he never accepts any money. His dream is to start his own microbrewery, and he sees money as the only obstacle. He must have enough from the start to produce the high minimum requirements set by Korean law. He doesn’t see a lack of curiosity in more â€œinterestingâ€ beer among Koreans, simply a lack of exposure. â€œPeople get used to Max, Hite, Cass beer taste. Korean people donâ€™t know about the other types of beer. They only taste the three types of beer. I think the Korean people will gradually know the other tastes of beer,â€ said Mr. Kim.Â  He has also been actively experimenting with making his own bacon and sausage (hence the meat slicer and two sausage stuffers) and hinted at expanding GoodBeer to include GoodSausage and GoodBacon.

Mr. Kim is hopeful that Korean laws may change in the future to be more supportive of small businesses.Â He already sees smaller chains gaining influence and someday believes that an independently owned brewery could successfully bottle and sell beer.Â There is presently a DAUM Internet club that has thousands of Korean members as well as a healthy group of foreigners united by Rob Titely, Canadian ex-patriate and creator of the on-line community â€œHomebrew Korea.â€

Mr. Kim has reason developed a keen sense of creativity amidst a culture of conformity. He is one of the few Koreans who we’ve met that has found a way to earn a living doing what he thoroughly enjoys. Korea is often described as the soul-sucker of hobbies by foreigners, because people are so obsessed with getting ahead economically and socially that they neglect personal interests. Finding someone who has abandoned this ideology for something they love, yet also has the skills to make a comfortable living, is inspiring.

With Mr. Kimâ€™s help, we have have been able to brew almost ten batches over the past six months at the BeerLab. An upcoming homebrew competition will be our first chance to put our beer to the test in Seoul.Â Â  However, our money is on Mr. Kim.

For more information about Mr. Kim’s BeerLab or ordering supplies visit www.goodbeer.co.kr. The best way to contact him is via email at goodbeer@goodbeer.co.kr
The SMaSH-Off homebrew competition will take place on June 19th at Gecko’s in Jukjeon, South Korea. For more information visit www.hiexpat.com/events/details/420
If you’re interested in more details about the Korean beer laws, Rob Titley has done a great job translating the specifics into English. There is actually some faint hope of deregulation sometime this year to promote small entrepreneurs in this industry. The translation can be found at www.homebrewkorea.com/?p=398

This entry was posted in Features, The Spirit of Entrepreneurs. Bookmark the permalink.

3 Responses to BeerStory: One Korean’s dream to brew better beer

This site uses Akismet to reduce spam. Learn how your comment data is processed.