A Place to Call Their Own: Seoul’s Raphael Clinic

Seoulâ€™s foreign workers find a rare place made for them in the Raphael Clinic. (Part one of two) 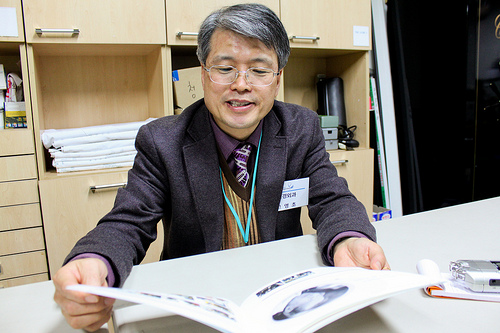 Dr. Young-Cho Koh, a neurologist at Seoul’s Konkuk University, has been volunteering his medical services for over 30 years. Photo by Danielle
Harms/International Underground

If you ask Dr. Young-Cho Koh how many years he has spent volunteering in charity hospitals, you will have to wait for for him to do the mental math. â€œYou know, itâ€™s a very long story.â€ Koh explains.

Muttering dates to himself leads Koh back to medical school, where he got his first taste of volunteering in, â€œ1973,â€ he concludes, â€œso it is already 37 years continuing my volunteer [work] as a medical doctor.â€ Now, decades later, Koh spends much of his time at Konkuk University Medical Center in Seoul, South Korea, where he has progressed from a fledgling medical student to a Chairman and Professor of Neurosurgery and the Neuroscience Center. Rather than sitting behind a desk at his office, today he is seated on a rickety stool behind a plastic card table at the Raphael Clinic, located in Seoulâ€™s Hyehwa neighborhood.

Just yards away lies a waiting room filled with people from countries spanning the world. Filipinos speaking in Tagalog sit beside Chinese patients chatting in Mandarin. Conversations in more languages, from Vietnamese to Russian, create a low hum in the line of people winding up the stairs to the clinic’s entry. With a population of over one million foreign workers in South Korea, every Sunday a small slice of them find their way through this line to the Raphael Clinic, run by approximately 300 Korean volunteers. Ranging from doctors and lawyers to medical students and teenagers, once every week this team works together to offer free medical services to foreign workers.

A hallway by week, clinic by weekend 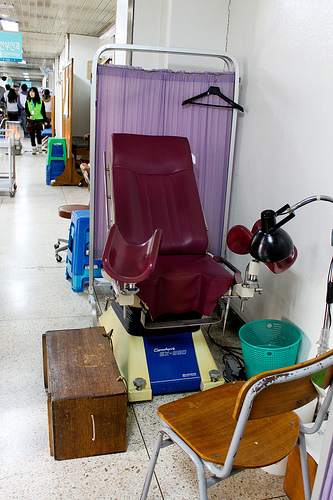 The Raphael Clinic makes due with what space and equipment they have. Most of the clinic’s medical equipment is donated, often from Seoul National University. See more images from the Raphael Clinic. Photo by Anna Waigand/International Underground

This is not the clinicâ€™s first home. Having overgrown previous spaces, it now resides in a building owned by a local high school. Inside is a large auditorium and an assortment of other rooms, but you wonâ€™t find the clinic inside any of them. The Raphael Clinic calls the labyrinth of the buildingâ€™s third floor hallway home.

â€œThey lend us this place for free,â€ head volunteer Min Jik Yang explains. A friendly woman in her twenties, Yang is a longtime veteran of the clinic. She first donated a Sundayâ€™s worth of time while in high school. Even then, Yang recalls how willing immigrants were to share with her their stories of mistreatment and discrimination at their jobs. â€œThey were really really negative,â€ she said. Often the foreign workers felt they were, â€œtreated like animals,â€ she said. â€œThey actually said that, to me, even [though] I was a high schooler.â€ While Yang still hears accounts like this, she is optimistic conditions are improving. â€œNowadays, some of them are still treated unfairly, but most conditions I think [are] getting better.â€

While an immigrantâ€™s experience on the worksite depends heavily on his or her boss, Koh and Yang have heard that small business owners do not always afford foreign people fair treatment, â€œespecially [those] who cannot work properly,â€ due to illness or injury, Koh said. â€œWe have the responsibility as the Korean people to provide some condolences for those people that are suffering from pain.â€

South Korea has an impressive set of laws on the books ensuring that foreign workers have the same legal rights as Koreans. According to the Korean governmentâ€™s Employment Permit System, which regulates foreign workers, the law and employers alike are expected to, â€œApply identical labor conditions and human rights [to the foreign workers] as the native workers.â€

This includes National Health Insurance, which is funded by taxes and and should ensure that all residents of Korea can receive medical care at the same low costs regardless of nationality. But, as Raphael Clinic Director Sophia Kim explains, that is not always the reality. â€œSince most companies that hire foreign workers are unstable, workers who work in those companies are not given medical insurance,â€ she explained in an e-mail. Even when workers receive National Health Insurance, the low costs are too much to pay for some. â€œWorkers who are admitted to Korea legally cannot receive medical insurance because a payment of about 25,000 won every month for foreign workers is burdensomeâ€ Kim pointed out. 25,000 won equates to approximately $22 US dollars.

Making due with what you have

As Yang leads us through the clinicâ€™s halls, she points from one makeshift department to another. â€œHere is ENT,â€ she says, pointing to the Ear, Nose, and Throat department, consisting mostly of a small desk pushed against a hallway wall. On it lies a laptop, a diagram of the human sinus system, a stethoscope, and a box of cotton swabs. A long list of medical departments unfolds as we proceed down the hallway, â€œInternal medicine, family medicine, EKG,â€ she recites. Labeled by signs suspended from the ceiling, desks line both sides of the hallway: dental, neurology, OBGYN, psychology, cardiology, orthopedic surgery, and more. 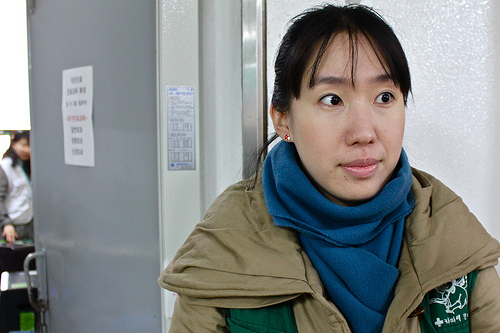 â€œI think this is a big hallway,â€ Yang says, and she is right. About as wide as a subway car, it occasionally broadens and has plenty of corners utilized for storage, a precious commodity for an operation that has to pack up every week. Over a dozen propane tanks used to fuel the clinicâ€™s many space heaters fill one corner. A metal cabinet with a sturdy lock sits open for the moment, until the clinicâ€™s close, when all the valuables will be stowed away and locked up until next Sunday. Surrounded by eye charts, exam tables, and a hodgepodge of other hospital gadgetry, it’s still hard to forget that this is a hallway.

Within this drafty corridor, though, the staff is nothing but warm. All around, doctors and other volunteers give undivided attention to patients. â€œNormally we get like six to seven physicians a week,â€ Yang said, â€œThey take turns.â€ Many work at Seoul National University, but with Kohâ€™s encouragement, volunteers from Konkuk University have begun to work every other weekend, on â€œminorâ€ Sundays, like today. â€œNext weekend is a major weekend,â€ Yang said. Alternating by the week, the Raphael Clinic offers all of its services one week, and a limited amount the next. â€œStill, [on] these minor service Sundays, we do not have enough doctors who can provide their services,â€ Koh said.

The clinic first opened its doors in 1997, with support from the local Archdiocese of the Catholic Church and a group of committed volunteers. Funded by grants and donations, the Clinic receives significant support from large corporate contributions, but plenty from individual donors as well. In addition to giving his time, Koh also gives financial support. He contributes every month, and says many volunteers do the same. Each month, â€œItâ€™s automatic,â€ he said. The medical equipment is also donated by benefactors, like Seoul National University, whose emblem can be seen on devices throughout the Clinic.

Never a patient too late or a visa too old

The Raphael Clinic serves between 300 and 500 people weekly. Patients arrive around two in the afternoon and continue in a steady stream into the evening. When you ask Yang when the clinic closes, the answer is simple: when the patients stop coming. â€œWe take them [all],â€ she says, â€œeven though they are really really late, [we] just let them in.â€

Latecomers are not the only people who find a warm welcome at the clinic. This is a rare place where undocumented immigrants receive the same care and treatment as legally documented foreign workers. Despite their policy of helping everybody,whatever their visa status, many undocumented workers remain too wary of deportation to venture from their homes unless traveling directly to work. In that case, the clinic comes to them, often pursuing tips from visitors regarding neighbors and friends that need medical attention. With a team of social workers on hand and a legal division staffed by lawyers working pro bono from Seoul law firms, the Raphael Clinic is ready for whatever issues they may encounter on house calls.

While Koh has seen patients from a long list of nationalities, some are more prevalent than others. â€œI guess the Philippines and Bangladesh are the two most common foreign workers,â€ he said. Even though Filipino immigrants rank fourth on the list of foreigners in Korea, it’s little surprise that Koh estimates them among his most frequent visitors. The Raphael Clinic in Hyehwa-dong happens to be in the heart of an area transformed into a Filipino community, a so-called â€œLittle Manila,â€ each Sunday. 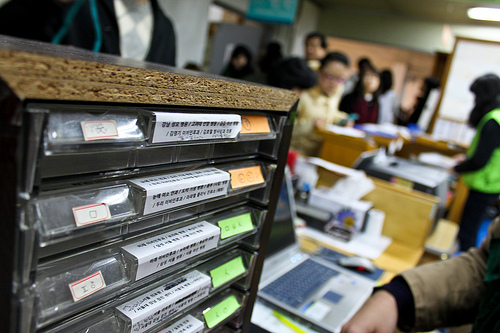 When a patient needs services the Raphael Clinic cannot provide, they start by referring them to other charity clinics located around Seoul. There are at least five of them. See more images from the Raphael Clinic. Photo by Anna Waigand/International Underground

A Filipino Market operated every Sunday by vendors selling imported goods is close enough for its sounds and smells to reach the clinic doors. Many in the clinic waiting room are Filipinos still dressed in formal attire after attending mass at the Hyehwa Catholic Church, a short walk away. Nearby a rare bank can be found open on Sundays, a branch of Woori Bank opened solely to accommodate the demand from Filipinos sending remittances home to loved ones. A short walk from the main road leads to the Hyehwa Filipino Catholic Center, a community center offering a shelter, social hub, and counseling services.

For many Filipinos, spending Sunday in Hyehwa is a weekly ritual, and a trip to the Raphael Clinic is one standard stop. Often working six days a week, Filipino workers have to capitalize on their one free day and use the passing time wisely. Despite boasting many departments, the Raphael Clinic is not outfitted to address every medical need. A plastic drawer on the clinicâ€™s front desk holds stacks of referral forms for other free clinics around the city. When there is not a charity hospital that can meet a patientâ€™s needs, then clinic volunteers will go to work making arrangements in private hospitals and raising funds to pay the costs.

According to Yang, the Raphael Clinic is just one of at least five other charity hospitals around Seoul. Getting the exact care you need all in your one Sunday off each week can become a game of strategy. If you have dental issues, Raphael Clinic can help you to a point, but if a tooth needs to be pulled, Yang hears that Kurro Hospital can provide that service. â€œI heard they have a dental clinic, but they pull their teeth, which we donâ€™t do here,â€ she said. For foreign workers, jumping through hoops in someone elseâ€™s system is nothing new. The Raphael Clinic, however, offers a place that is made just for them, a rare place of helpful faces for immigrants to call their own.

This is part one of a two-part series. To learn more about Filipino workers in South Korea, and the health and labor issues that bring them to the Raphael Clinic, subscribe to International Underground or visit again.

This entry was posted in Inside Seoul's Filipino Community. Bookmark the permalink.

7 Responses to A Place to Call Their Own: Seoul’s Raphael Clinic

This site uses Akismet to reduce spam. Learn how your comment data is processed.